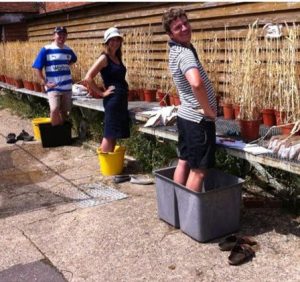 From Farm to Research to Farm again

One classic question that always cropped up during school careers sessions and interviews was “where do you see yourself in 10 years’ time?” When I remember my answer as a quiet, farming obsessed, 15 year old, “starting a career in plant breeding after completing a PhD” certainly didn’t cross my mind. But after two particularly influential placements, this is where I find myself!

It’s amazing what can be achieved when discussing things over a beer. Having decided to study agriculture at the University of Reading, a compromise of my interests and new found A-level biology ability, I found myself on a fresher year study tour of Wales looking at different farming systems. One evening, in the hotel bar with a beer in hand, I got talking to Dr Hannah Jones about my particular interest in crop science, where she suggested doing a summer “UROP” placement, working on a small project focussing on heat stress and wheat flowering diversity. Although short in duration and small in scale, this placement sparked my interest in research. By the time I had reached my final year, staying in education and undertaking a PhD was cemented in my mind. Having focussed most of my modules on crop science at this point, most of my lectures were given by Prof Mike Gooding. Hearing that there was a PhD available at the university, I applied not thinking I had much of a chance, but I somehow got it! Under the tutelage of Mike, Mikhail Semenov and Martin Lukac.

My PhD primarily studied the effect of heat stress on wheat around the reproductive phases of growth, particularly looking at the influence of discrete growth stage and genotype. Initially, I sought to understand the detail of wheat’s life cycle, which involved a prolonged reading period, culminating in a review of the decimal growth stage system, and its use when studying abiotic stress effects1. This time, my experiments were on a much larger scale compared to the UROP placement! Suddenly, I found myself in charge of thousands of pots for a pair of controlled environment heat stress experiments. The first compared two elite genotypes across the whole reproductive period, using multiple short duration stresses to identify discrete growth stage effects. After much deliberation on statistical methods, I finally managed to model the “double dip” response, to our knowledge for the first time. This clearly showed the particularly discrete effect of growth stage on stress response across this period, as well as showing that genotypes clearly differ for this response2. Following on from this, a larger experiment sought to stress a 62 line DH population produced from the two previous genotypes, differing for Rht allele and Ppd Sensitivity, at 3 key growth stages. From this experiment I found the Gibberellin (Ga) insensitive Rht-D1b to be more tolerant to stress than the Ga sensitive allele Rht8, which is common in central and southern Europe and also that the photoperiod insensitive allele Ppd-D1a, increases susceptibility to heat stress2. These findings go against the grain (pun always intended) of previous work, which generally suggest alleles from southern Europe tend to be more tolerant to stress.

Having been a student on a BBSRC-DTP funded project, I was required to undertake a three month industrial placement. Wanting to continue working on wheat, I found myself working for KWS in the breeding team for a summer. Once again having Hannah to thank for a placement, with her putting me in touch with the company. Here I discovered there is indeed more to research than just university life. I soon found myself working on a scale I didn’t think was possible, with hectares of trials and tens of thousands of potential future genotypes, all at various stages of the breeding cycle. My mind had to quickly change from studying things in fine detail to working on a massive scale at a very quick speed! Although an intense summer, I found I was really enjoying myself and that research didn’t just mean my own experiments and producing papers. Here I was helping to implement research findings in to something that the farmer actually uses. Having submitted my PhD in March 2017 (and finally graduated by the end of the year), I immediately started work as Assistant Wheat Breeder with KWS. Here, I like to think I’m combining my old interest of farming with research, producing improved varieties for farmers to use. Based on my experience of how two simple placements can change a career path, I’m certainly not going to try and predict where I will end up in 10 years’ time, but hopefully I’ll enjoy the ride just as much.

No comments to show.